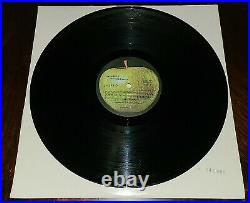 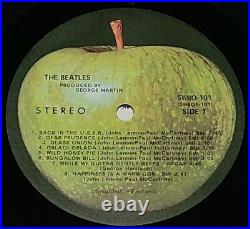 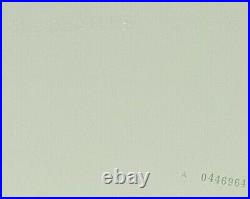 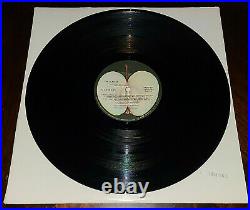 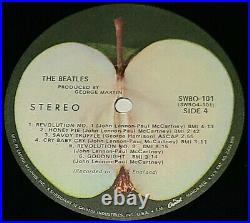 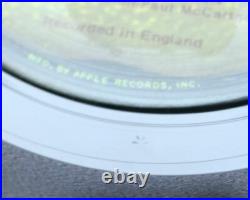 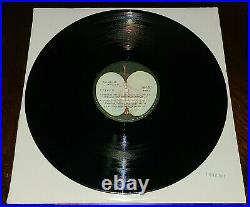 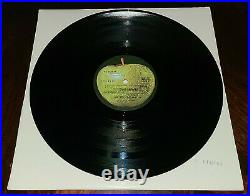 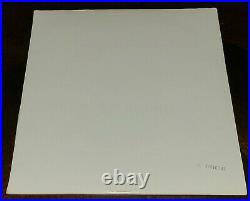 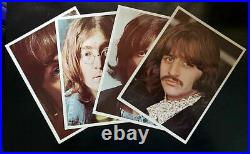 Incredible low very early J40/J41 Matrix stamps, which are documented as the very first pressings after George Harrison remastered the'Compressed White Album'. These J40/J41 lacquers are visually unbanded, and are the only ones of this kind, only found with J40/J41 matrix stamps. In addition, this is the rare and highly sought after pressing containing all 7 printing errors on the labels. Upon release of the album, John Lennon noticed these mistakes and had them corrected immediately on future pressings but not before some of these extremely rare error copies had already entered the marketplace.

The very glossy LPs are EX/NM , showing very little play, with minor hairlines/scuffs. These are the nicest J40/J41 stamped LPs I've ever seen. You would expect more play, being 53 years old. The labels are absolutely NM with NO writing and NO stickers.

The spindle holes are pristine and perfect. The inner/outer spines are completely intact and looks NM/MINT!! The NM cover is stunning with NO seam splits.

NO WRITING on the front, back or inside the sleeve , and NO WRITING on any of the record labels!! Middle right has very minor crease. It will arrive with the original thick-stock portrait photos and original poster.

9" instead of "Revolution 9 7. "Why Don't we do it in the road" without the question mark?

Error #7 without the question mark, is the rarest of all the 7 When you look at others for sale, make sure error #7 is among them! This is the nicest 7 label error, J40/J41 copy you'll ever see for sale. All the photos you see above are completely undoctored and free from any Photoshop, and are of the exact treasures you will receive!

No White Album is perfect, but this treasure is truly exceptional. The cardboard used in the making of The White Album was extremely poor and susceptible to the seams easily separating, fading, soiling, ring wear, and both of the spines just disintegrating.

Here's very invaluable information on how The Beatles White Albums were numbered, and the meaning behind all the sequences... The first 25 White Albums were numbered with an'A' prefix and then a series of zeros preceding the number e. There are always seven digits following the'A' so if it was a single digit number it would be preceded by six zeroes or if it was a two digit number it would be preceded by five zeroes. It is not known what the'A' was indicative of (it may mean printed in America or Apple but neither is confirmed). Numbers 26-99 were three digit numbers preceded with a zero and no prefix.

Numbers 100 through approximately 209,999 were preceded with the correct number of zeroes to make them a seven digit number. (never having a letter prefix).