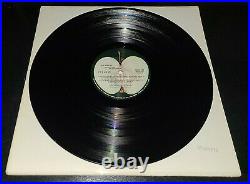 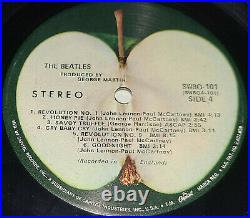 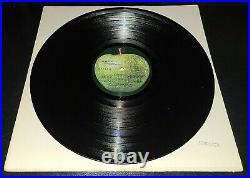 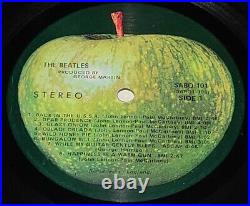 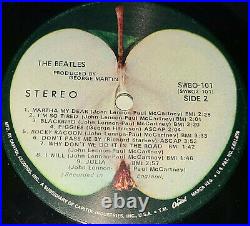 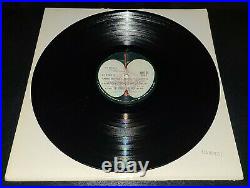 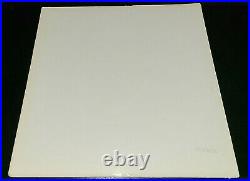 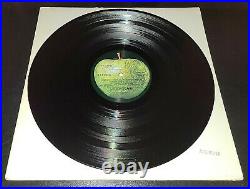 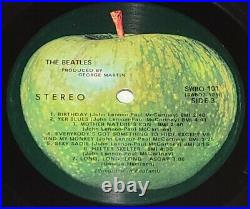 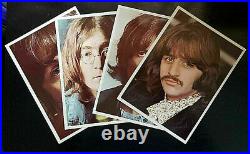 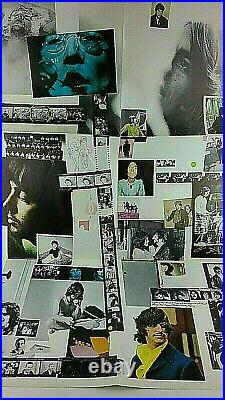 This is the rare and highly sought after pressing containing all 7 printing errors on the labels. Upon release of the album, John Lennon noticed these mistakes and had them corrected immediately on future pressings but not before some of these extremely rare error copies had already entered the marketplace.

The VG GLOSSY LPs show play with scratches and scuffs. The labels are absolutely PRISTINE MINT with NO writing and NO stickers. The outer spine is beautiful and completely intact!! The cover is EX/NM with NO seam splits showing. NO WRITING on the front, back or inside the sleeve , and NO WRITING on any of the record labels!!

The spindle holes are absolutely pristine and perfect. It will arrive with original thick-stock portrait photos and original poster! The original inner sleeves are present, with the normal wear! A machine stamped triangle with the initials IAM indicates that the record was pressed at the Scranton, Pennsylvania plant. IAM stands for the I nternational A ssociation of M achinists union whose members worked at the Scranton plant.

These extremely rare 7 label error BEATLES White Albums are being hoarded, especially overseas, and when they have a EX/NM cover and numbered, they are all disappearing for sale anywhere!! One day soon they will all be gone! All the photos you see above are completely undoctored and free from any Photoshop, and are of the EXACT treasures you will receive!

No White Album is perfect, but this one is very nice. The cardboard used in the making of The White Album was extremely poor and susceptible to the seams easily separating, fading, soiling, ring wear, and both of the spines just disintegrating.

Is raised with the period below it instead of beside it. For the final numbers over 3,000,000 the numbers are prefixed with a wide'A. Please make sure the items you see above are exactly the items you are seeking to add to your collection...