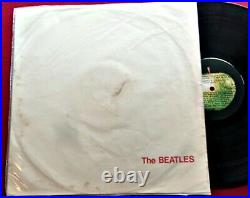 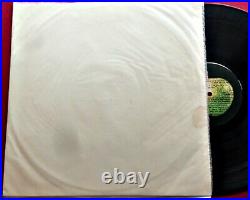 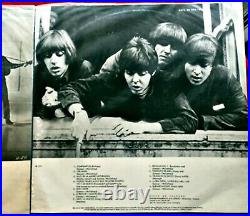 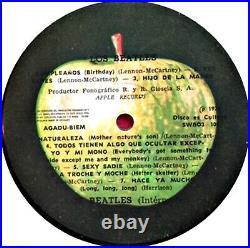 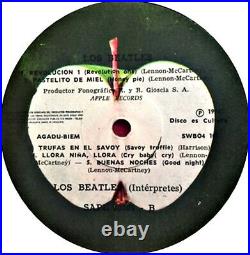 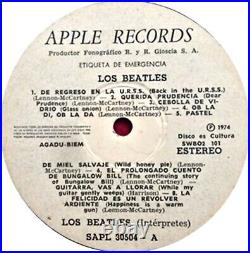 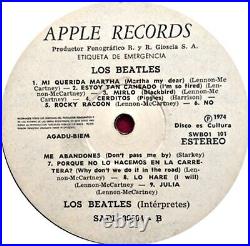 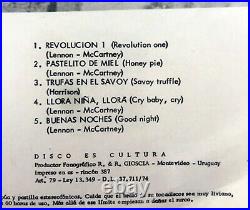 THE BEATLES - WHITE ALBUM. APPLE SAPL 30504 / 30505. This is a ultra rare uruguayan release with many things that made this version and particular copy a Collector's Item.

The original uruguayan White album in 1968 was released with cover imported from UK and the records were made in Uruguay following stamper from UK, under Odeon label. This version from 1974 has different pictures inside gatefold only used in Uruguay and it's under Apple labels, but. The first record comes with an Apple white emergency label, the second record with the Apple regular label.

The records were made using stamper from USA, not UK as first version. "Revolution 9" is not present in list of songtitles in gatefold, nor in labels, as you can check it goes from "Cry baby Cry" to "Good Night", but it's present in record. THERE'S NO MORE TO SAY THAN YOU MUST HAVE THIS COPY. ONE OF THE RAREST VERSION OF THIS GREAT ALBUM. URUGUAY - APPLE - 1974.

Revolution 9 (NOT LISTED IN COVER OR LABELS, BUT PRESENT IN RECORD). G R A D I N G. S Y S T E M. Mint means perfect and nothing else.

Simply put, a mint cover should appear to have never had a record inside it. Virtually flawless records are not perfect.

A very minor scuff and very little else can appear on the vinyl. The cover should look as close to perfect with only minor signs of wear and or age.

Condition for vinyl will allow minor scuffs which are visible but only slightly. There may be more than a few. The wear should be minimal and of course should play mint!

Artwork should still be as close to perfect as can be. Some impression to the cover (minor outer ring wear) but no ink wear! Some slight creases to the corners, but not wrinkled and obtrusive to the eye. VG+ will show wear, surface scuffs, (or spiral scuffs that came from turn table platters or jukeboxes for 45 singles) and some very light scratches. Surface scuffs are caused from blunt (not sharp) objects.

A virtually clean cover, but may have small writing on it. The artwork should look clean with slightly more aging. The back of the cover usually gives away the age of the cover. The Very Good Grade does not mean Very good at all. At least not in the visual sense. A Very Good (VG) record will appear well played but still have some luster.

The vinyl may be faded, slightly grayish, yet appears to have been handled as carefully as it could have been helped. VG covers will look worn, used. There may be some seam splitting but not completely separated!

There will be some ring wear, where the ink has begun to wear off. Giving the cover a look of snow falling. There may be some writing on the cover It will look aged. A good record will look very well played, dull, grayish and possibly abused. However a Good record should still play. It will have distracting surface noise. Such as crackle that is continuous or some hiss. A Good cover will have just about everything wrong with it. It will have seam splits possibly taped repaired, but only with scotch tape.

No duct tape or masking tape repairs. These are big turn offs.

It won't be playable for the most part, and so they are not much good hanging onto them. Very few poor records are collectable.

This item is in the category "Music\Vinyl Records".