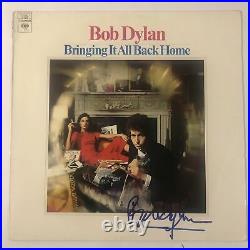 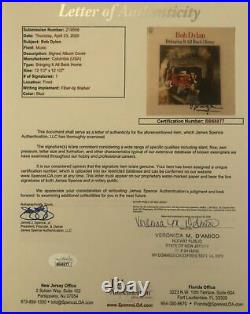 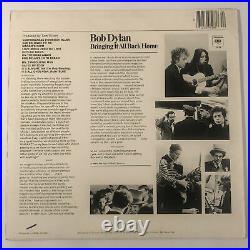 BOB DYLAN Signed Autograph "BRINGING IT ALL BACK HOME" Album Record Cover LP JSA Authentication. FLAWLESS AND MAGNIFICENT EXAMPLE OF DYLAN'S MUCH SOUGHT AFTER SIGNATURE. About the John Brennan Autograph Collection. In-person autograph pioneer John Brennan, owner and founder of the John Brennan Autograph Collection (a division of VIP Autographs) has collected on the streets of New York City, Los Angeles, Seattle, London, Paris, Germany and beyond for over 40 years. From a small town in Connecticut, to his mainstay electric streets of the Big Apple, over four decades John amassed thousands of autographs developing into an unprecedented assemblage.

John was recently featured with his Nirvana albums on Pawn Stars 2020 episode at the National Sports Collectors Convention, his collections been written about on Autograph Magazine Live, and hes been interviewed by music collector meccas Goldmine Magazine and Record Collector Magazine. Forever on a quest to source the most genuine, first-hand witnessed product possible throughout his career, authenticity is an absolutely integral aspect of The John Brennan Collection and, as such, each item is certified by either Beckett or JSA Authentication third-party services, and comes with a Brennan hand-signed Certificate of Authenticity (COA) guaranteeing its authenticity and certifying it genuine for life. Please review our condition overview guidelines by format below.

We'll do our best to mention any egregious condition effects on a particular listing, however, be sure to use the format overviews and photos as your guide. The albums offered by the John Brennan Collection are in general fine condition, but may present age wear such as typical dings and creases.

The records are present unless otherwise noted, though, the condition and playability of the records are not guaranteed. The guitars offered by the John Brennan Collection are in like-new condition, full-size and fully functionally unless noted otherwise. The CD's offered by the John Brennan Collection are generally in fine condition, though some may exhibit slight rubbing or cracks to plastic case. All items are guaranteed authentic and to pass third-party authentication services and without time limit to the original purchaser.

All items from the John Brennan Collection are authentically hand-signed and guaranteed genuine for life, accompanied by at least one third party authentication cert or letter, and a hand-signed John Brennan Collection Certificate of Authenticity (COA) picturing the item. The item "BOB DYLAN Signed Autograph BRINGING IT ALL BACK HOME Album Record Cover LP JSA" is in sale since Wednesday, May 13, 2020. This item is in the category "Entertainment Memorabilia\Music Memorabilia\Rock & Pop\Artists D\Dylan, Bob\Other Bob Dylan Memorabilia". The seller is "johnbrennancollection" and is located in Amherst, New Hampshire.