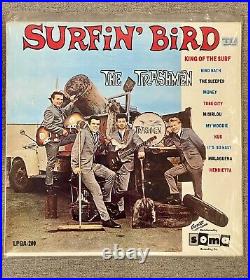 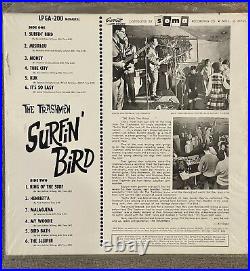 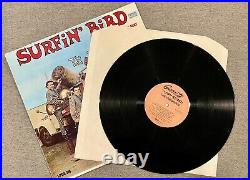 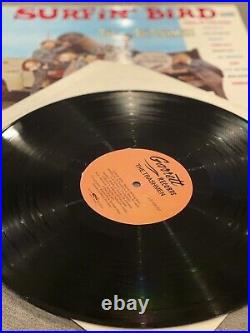 Put the tone arm down and the volume up! This is an original 1964 recording by the seminal surf/hot rod Minneapolis band The Trashmen.

One of the classic GARAGE greats from the mid'60s, loaded full-tilt with crude raw twang guitar action... THIS IS AN ORIGINAL LP ON GARRETT RECORDS 200 IN GLORIOUS MONO, RED LABEL, FIRST PRESSING; ISSUED IN 1964. COVER HAS BEEN PROTECTED BY A PLASTIC SLEEVE FOR DECADES - MAINTAINS ITS GLOSSY APPEARANCE WITHOUT ANY SIGNS OF SCUFFING OR CREASING.

VINYL IS VG+ - COVER IS MINT CONDITION! The only album released by the group during the lifetime of the immortal TRASHMEN actually outstrips most of the Southern California-based competition, due to the ferocious grit of the playing and a vaguely demented, go-for-broke recklessness. Hailing from the wintry heartland of Minneapolis, the Trashmen achieved cult immortality with a passel of landlocked surf anthems and reckless garage-rock gems, best exemplified by their immortal anthem "Surfin' Bird, " two and a half minutes of inspired, unhinged mayhem that's never been equaled.

But "Surfin' Bird" is just the tip of the iceberg of the 1964 album that bears the song's name. The only longplayer that the band released during their original lifespan, Surfin' Bird demonstrates that the Trashmen were no novelty act or one-hit wonder, but a brilliant, original outfit who filtered their R&B and surf influences through their own cheerfully demented sensibility to make some of their era's most reckless, uninhibited rock'n' roll.

In addition to the iconic "Surfin' Bird, " the album features the surf-and-drag killers "King of the Surf, " "My Woodie" and "Tube City, " along with the "Bird"-themed sequels "Bird Bath" and Bird Dance Beat. This item is in the category "Music\Vinyl Records".

The seller is "pmusilli" and is located in this country: US. This item can be shipped worldwide.