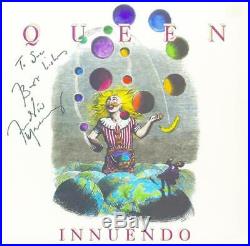 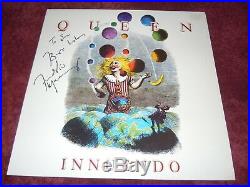 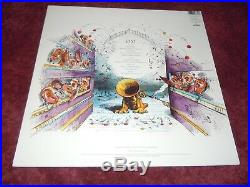 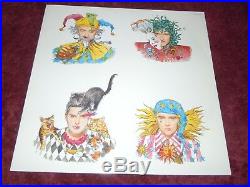 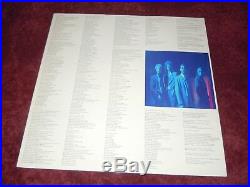 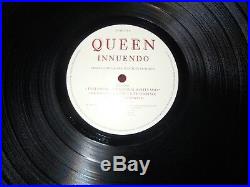 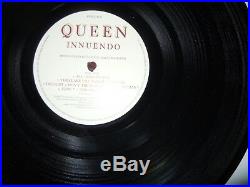 The Innuendo cover was signed by Freddie for a female relative (Sue) of a craftsman who was employed to work at Freddies. Home (Garden Lodge) in Kensington London. Innuendo was released on February the 5th 1991 and was Queens last record released during Freddies lifetime, its a brilliant record, Freddie sadly passed some nine months (November 24th) after its release. Recurring session notes for "The Show Must Go On" from this album.

After listening to John Deacon and Roger Taylor playing the chord sequence that later on would be the basis for almost the entire song, Brian May sat down with Freddie Mercury and the two of them decided the theme of the song and wrote some lyrics. May wrote down the rest of the words as well as the melody, and added a bridge with a chord sequence inspired by Pachelbel s Canon. Demo versions featured May singing, having to sing some parts in falsetto because they were too high.

May presented the final demo to Mercury, he had doubts that Mercury would be physically capable of singing the song's highly demanding vocal line, due to the extent of his illness at the time. To Mays surprise, when the time came to record the vocals, Mercury consumed a measure of vodka and said I'll fcking do it, darling! Then proceeded to perform the vocal line in one take without problems. Queen and Freddies music and legacy will live forever! The cover is in excellent condition theres just a bit of creasing on the bottom right corner and a spot where a label was, there are no splits and the printed inner sleeve and record are included.

The first time I saw Queen in concert was on their first American tour when they were the opening act on Mott The Hooples six night run on Broadway at the Uris Theatre here in New York City in 1974 and you could tell even then, that it wouldnt be long for them to achieve superstardom. This Freddie signed Innuendo album cover.

Comes with a certificate of authenticity from PSA/DNA. When you have the chance to, take a look at the other items I have listed for sale, you might find something of interest.

The item "Freddie Mercury Queen Authentic Signed /Autographed Innuendo Album Cover With PSA" is in sale since Wednesday, April 24, 2019. This item is in the category "Entertainment Memorabilia\Autographs-Original\Music\Rock & Pop\Records". The seller is "pinnacleartists" and is located in Staten Island, New York. This item can be shipped worldwide.