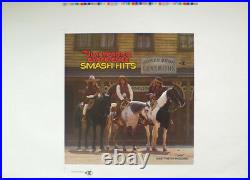 Jimi Hendrix Experience - Alternate 1968 "Smash Hits" Album Cover Proof. An album cover proof with never produced alternate artwork for the Jimi Hendrix Experience's 1968 album Smash Hits. " This image of the band on horseback was the original artwork planned for Hendrix's "Smash Hits album. At some point, however, a decision was made to scrap this artwork in favor of a multiple exposure photograph of Jimi alone. The photo was used as a poster insert instead.

This is one of a few proofs produced by Hendrix's label Reprise/Warner Bros. They were discarded by the label in the early 70's and rescued from the dumpster by an enterprising employee.

This proof is in near mint condition and measures 17" x 22", with color bars along the top and a Warner/Reprise logo at the bottom. The album cover image measures 12 1/2 square. This proof was obtained from Jeff Gold in 1977 and has been kept rolled since.. Note: In 2016 Legacy Recordings reissued "Smash Hits" with this cover for Record Store day, in a limited edition of 5000.

This is an original 68 proof, not the 16 reissue. This item is in the category "Music\Vinyl Records". The seller is "ll57" and is located in this country: US.