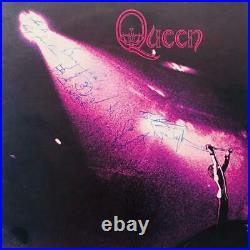 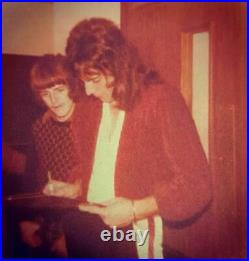 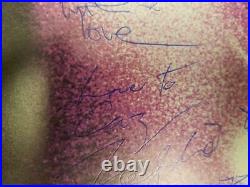 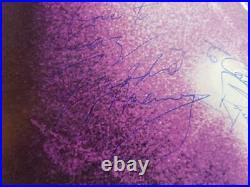 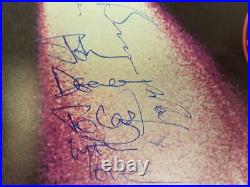 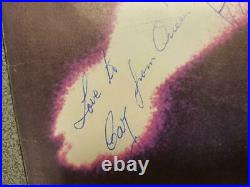 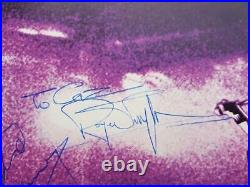 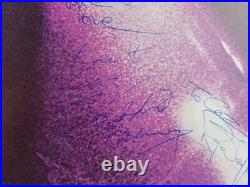 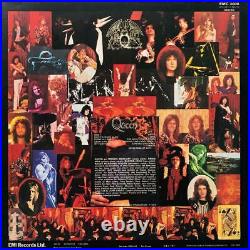 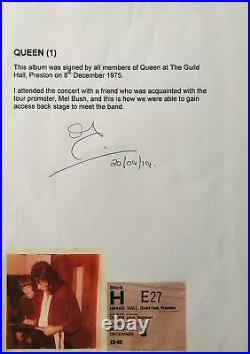 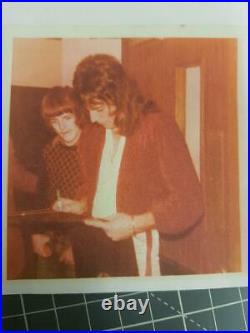 Queens 1973 debut UK EMI Records EMC 3006 album cover beautifully signed in blue biro/ ballpoint pen by Freddie Mercury, Brian May, John Deacon and Roger Taylor with dedications from all four with Brian adding Love to Caz from Queen , John Deacon To Caz with love, Roger adding To Caz and Freddie adding Love to Caz. The autographs were obtained on December the 8th 1975 at Guild Hall in Preston England by a Queen fan, whos friend was an acquaintance of Queen's tour promoter Mel Bush, which is how he had access to meet the band backstage and obtain their autographs.

If you take a look at the third image you will see the hand signed letter of provenance, which includes scanned images this album cover being signed by Freddie signing as well as the ticket stub for the concert. As you can see this comes with impeccable provenance. The blue ink signatures are boldly signed by the band in the spotlight part of the album cover, though there is still a bit of contrast issues, though it s not that bad for this beautiful piece of Queen history. The cover has some light ring wear and creasing, nothing serious whatsoever. This Queen autographed album cover would be a true centerpiece to anyones Queen and Freddie Mercury collection. The first time I saw Queen in concert was on their first American tour when they were the opening act on Mott The Hooples six night run on Broadway at the Uris Theatre here in New York City in 1974. II was easy to see that it wouldnt be long for them to achieve superstardom. This Queen signed album cover.

Comes with a Certificate of Authenticity from PSA/DNA. When you have the chance to, take a look at the other items I have listed for sale, you might find something of interest.

The item "Queen Freddie Mercury Signed Debut Album Cover Authentic Autographs With Proof" is in sale since Sunday, November 22, 2020. This item is in the category "Entertainment Memorabilia\Autographs-Original\Music\Rock & Pop\Records".